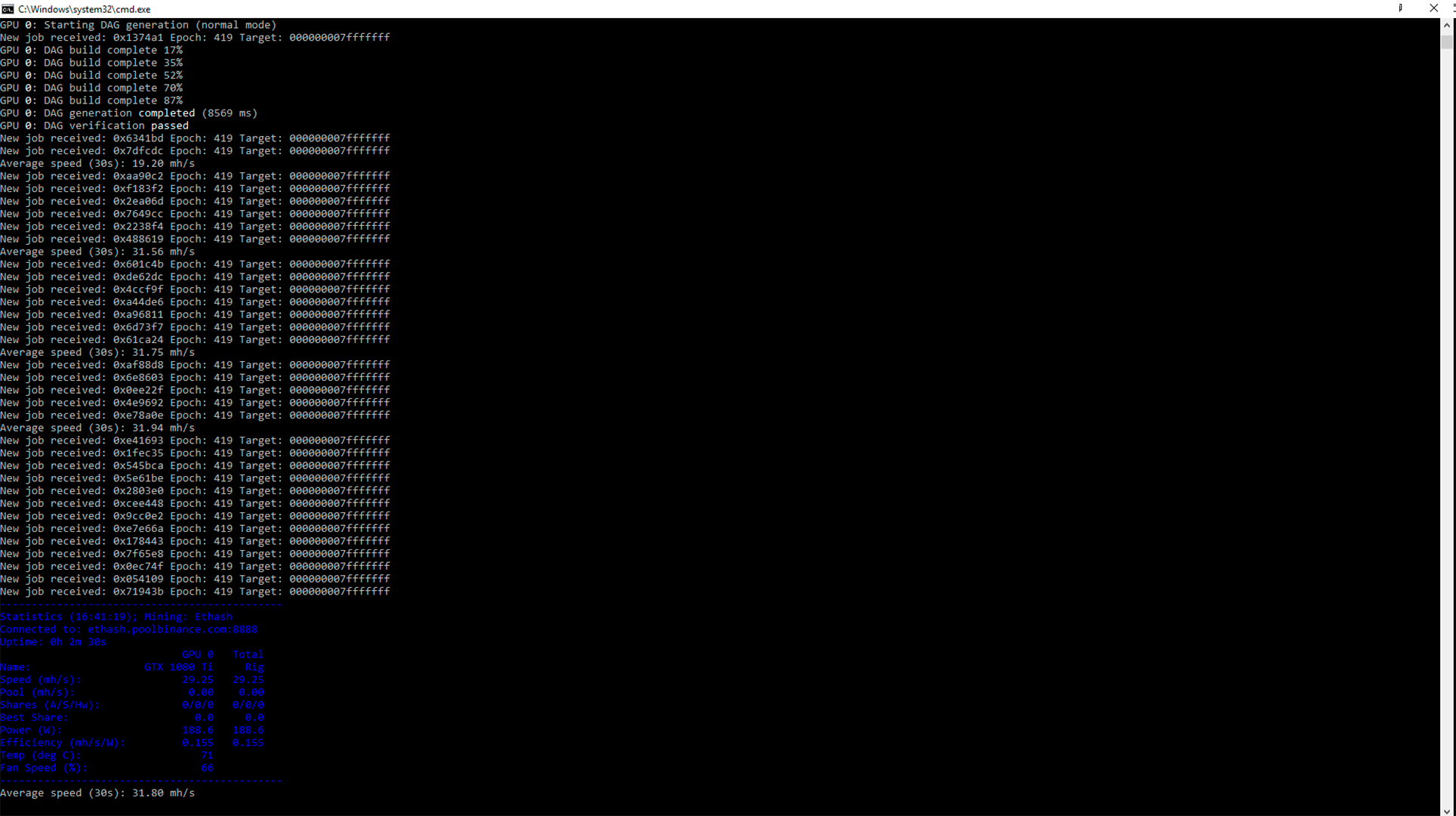 (1) The new Ergo epochs will increase the size of the data set used for mining by 5% every ~75 days. Some cards might need a bit more core clock to achieve the used performance. Also 2G cards in zombie mode will see a significant reduction in speed, because the data set is more then 2150 MBytes in size now.

Note: this is a Linux only release and also of rather temporary character. The added epochs will minimum last until the 1.35 release. After that an update should be made.

(1) Thanks to my Spanish mining community for letting me know and the help to track down this issue. (2) Feel free to discuss good tuning values in the discussion section of this release page.

Note: Windows version will follow in a few days. Sorting out driver issues ;)

Notes: (a) General tuning tip: The dataset generation of Ergo is more core heavy then e.g. for Ethash. Please allow more core clock and accordingly voltage! The mining phase of Autolykos V2 instead is not very power hungry. So the average consumption can still expected to be rather low.
(b) Optimization target were AMD GCN 3 cards with 4G of memory like RX 470, 560, … (c) In case the miner does not start on older cards, try to increase –keepfree slightly. Personal note: I am aware many would like to mine Ergo+Zil … this will be possible in future versions, but before I am changing some things how ZIL mining works internally - to make it more flexible to be added to other x + Zil configs :)

This is a Linux only release

Added the Nvidia 3060 “Unlocker” for Linux. This new mode mode allows to mine at a speed about 3/4 of the maximum speed of this cards. Differences to popular Windows solution:

Read the wiki page about more information and how to install this drivers on your favorite mining OS: https://github.com/Lolliedieb/lolMiner-releases/wiki/3060-Booster

Fixed a stratum error, that caused the “all shares stale” bug when too many reconnect attempts in a row did fail Fixed a crash on Nvidia GPUs when mixing ethproxy and Nicehash stratum modes in dualmodes. Fixed zombie tune values not applied when using json format for configuring Fixed displayed names of RX 6000 generation of cards and RTX 3060 in 460.x drivers.

This will be the last release that allows to use the Zombie-Mode in Windows. This is because the current implementation will start throwing invalid shares at some point and also going too slow to be worth using it any more. Furthermore Cuckaroo-29 with 48 cycle length - originally planned for Italocoin - got removed because of the lack of use.

lolMiner 1.22 - 1.24 are Linux only releases that targets improvements of the performance of the zombie mode in the Linux specific code. Therefore the yesterday released version 1.21 will remain the recent release for Windows. Miners that do not have a card using the zombie mode can safely ignore this update - it will behave identical to 1.21.

Personal release notes I received quite some requests with problems about Nvidia cards and also if I can add in zombie mode kernels for 4G Nvidias and RX 5500. I need to say I tried, but there are some hurdles that prevented it. I will do better Nvidia codes in the future, but preparing it takes time. That said the Navi cards somehow to not like to zombie tuning at all, that is why they only feature the standard zombie mode. Currently I also can not recommend mixing them into rigs where RX 4xx and 5xx cards run in zombie mode, because that seems to cause stuck systems from time to time. Mixing with 8G cards and do normal mining seems not to be an issue though.

lolMiner 1.22 & 1.23 are Linux only releases that targets improvements of the performance of the zombie mode in the Linux specific code. Therefore the yesterday released version 1.21 will remain the recent release for Windows. Miners that do not have a card using the zombie mode can safely ignore this update - it will behave identical to 1.21.

lolMiner 1.22 is a Linux only release that targets improvements of the performance of the zombie mode in the Linux specific code. Therefore the yesterday released version 1.21 will remain the recent release for Windows. Miners that do not have a card using the zombie mode can safely ignore this update - it will behave identical to 1.21.

Note on Watchdog use There are different reasons why a card might crash and drop to 0 mh/s or g/s or sol/s. Often this happens when the card is slightly too much undervolted, but other problems like heat are possible. Additionally the OpenCL driver of Nvidia cards sometimes crashes with a CL_OUT_OF_RESOURCE error - this is rather a software then a hardware thing and will be fixed soon. Anyways: Once a card is crashed some cards - mostly AMD cards - need a system reboot to get the faults card working again. Other cards - mostly Nvidia - just need a closing of the miner program - a few seconds wait time - and then are fine to get going again. Therefore the crashed card detection now allows three different options to proceed with a crashed card or driver:

–watchdog off This will do nothing except for printing a message. If only a single card did crash and not the whole driver this means the other cards will continue mining.

–watchdog exit This will close the miner with a exit code of 42. This can be picked up by the .sh or .bat script that did start the miner (an example is provided in mine_eth.sh and mine_eth.bat) so the miner will restart after some seconds of pause. This is recommended option for Nvidia cards.

–watchdog script With this option the miner will call an external script (default path is current working directory and there emergency.sh / .bat), which can be configured with –watchdogscript. The moment the script is called the miner itself will exit. The script needs to take care about rebooting the rig or informing the OS what to do. Since this was the default behavior in previous versions it also is the default. In case the script can not be found, an error will be printed and the miner will continue as with –watchdog off.

About the split mining There are two new splitting modes. Read here for configuration: https://github.com/Lolliedieb/lolMiner-releases/blob/master/dual_and_split_mining.md

a) For ETH+ZIL or ETC+ZIL:
Usually when mining ZIL you need to mine ETH on the same pool or you need to rely on a pool proxy forwarding mechanism implemented by the pool. The first case restricts restricts your mining to a single pool while the latter might have the disadvantage of a worse ETH mining latency or pool forwarding instabilities. lolMiner 1.20 and up allow to bypass the situation by adding a second stratum connection that will pick up your ETH (or ETC) shares and bring them directly to the pool you like, while the ZIL shares will be send during the ZIL shard epochs to the ZIL pool.

b) For mining an other algorithm with your 4G cards: Usually miners allow using only one algorithm at a time. With lolMiner 1.20 the miner starts supporting to create two connections to your favorite pools and mine two algorithms within the same miner instance. Concretely this mode was build to mine ETCHASH on some GPUS while others stay on ETH.

Compatibility note: The new zombie-tune parameter has only been tested with amdgpu-pro 20.30 and 20.40. Other drivers might cause issues. Also make sure your mining rig is configured to use PCIe-gen 2 connection to your GPUs.

Example effect of –zombie-tune parameter on the hash rate in Zombie Mode Note: it may be needed to tune each card individually. Tune value of 2 works for most cards, but some do not like the mode, especially when on PCIe-gen1 riser. 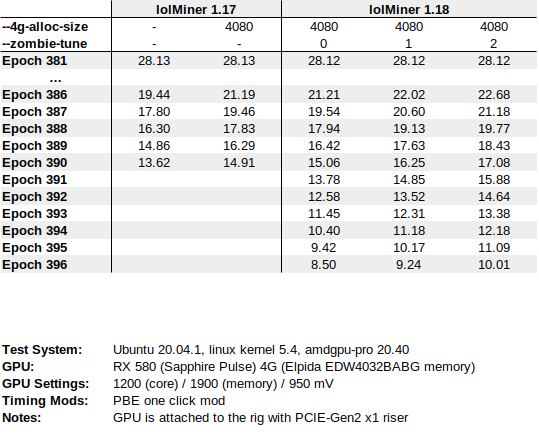 Note that at the moment the miner has no fan control module and also no throttling to keep a target temperature. This may be included in a future version. Thus you should put the limit high enough so the operation system or the driver has a chance to ramp up the fan speed itself. Currently tstop is supposed to be a overheat protection to prevent hardware damage in extreme cases, e.g. broken fans.

(1) Note on watchdog use: When the watchdog script is called the miner will stop working on the other cards. If this is not wished use –disablewatchdog. Please make sure the script can be executed with the current user rights / does password-less operations.

In case the miner detects no action of a GPU for at least a minute it will call the included scripts “reboot.sh” (Linux) or “reboot.bat” (Windows) and display a warning message in red. Afterwards the counters are reset. The scripts can be used to trigger a reboot of the rig or to call any other watchdog actions. The miner itself will take no further action and continue operation on the remaining cards.

Edit: support for Fiji was broken, A fix can be found here: https://github.com/Lolliedieb/lolMiner-preview/releases/tag/0.9.1hotfix

You can use this list as a reference for all Launch Parameters supported by LolMiner.